A new statue of Nelson Mandela dazzled, charmed, and empowered all gathered outside the South African embassy in Washington this past overcast Saturday. Especially endearing to those present was the uncovering—thanks to wind gusts—of Mandela’s characteristic raised fist ahead of the statue’s official unveiling. Speaker after speaker remarked on how “only Nelson Mandela would unveil himself”. He was certainly that kind of leader. He saw the path forward before others did, and then brought them along.

The premature exposure of Mandela’s defiant fist was perfect for an occasion rich in symbolism. South African Ambassador to the United States Ebrahim Rasool gave the speech of the day. He delivered a rousing tribute to Mandela and an impassioned, mesmerizing exposition of how morality trumps legality. “What is legal,” he reminded, “is not always moral”. He welcomed the nearly completed renovation of the embassy. He delighted in its spiritual cleansing and purifying. From being a place in which the heinous had been defended, the embassy was now a place of promise, where the new could be combined with the best of the old. The statue of Mandela out in front underscored this fresh beginning for the embassy. 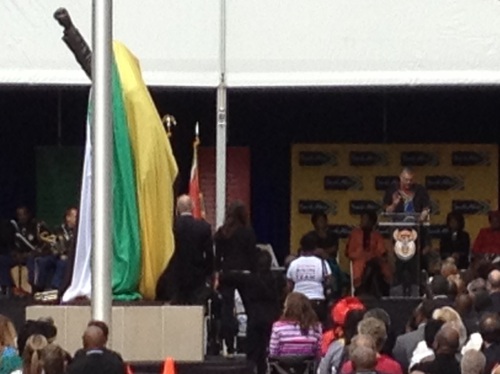 The tribute from Zindzi Mandela, the youngest Mandela daughter, was poignant. Most Americans remember her as a feisty 15-year-old who read a letter from her still-imprisoned father to a huge rally in Soweto in 1985. She famously read, “Only free men can negotiate. Prisoners cannot enter into contracts.” She was frank at Saturday’s event too. She shared how inaccurate and hurtful much media speculation was about her 95-year-old father’s health and how he would meet His Maker in due course. She stressed that he had always seen and conducted himself as part of a collective, as a member of the African National Congress, and never as an individual. Even in divorcing her mother, Zindzi noted, her father had done this as part of a collective.

Being part of a community or collective was a constant theme. American speakers at the event included luminaries from the protests organized outside the South African embassy in the mid-1980s. There were many references to these Washington demonstrations and the accompanying frequent arrests, as well as to the divestment and disinvestment campaigns. In these efforts, U.S. pension funds were pressured to divest the stock of U.S. and foreign corporations invested in South Africa; such companies were also pressured to disinvest from South Africa. These collaborative efforts were critical. Together, they helped force a reluctant Reagan administration to adopt sanctions against South Africa. Such economic and other pressures contributed to the Nationalist government’s increasing isolation and to a general sense of crisis. Eventually, the unconditional release of political prisoners like Mandela and negotiations between the Nationalist government and the ANC brought freedom and democracy to all South Africans.

Contributors from the podium spoke often about the essential connection between black Americans’ struggle to assert their civil rights in the United States and their support for black South Africans in their struggle. Many noted that this year is the 50th anniversary of the March on Washington and Martin Luther King’s “I have a Dream” speech. One speaker referenced the triangle that was now formed by the statues of King on the National Mall, Mahatma Gandhi nearby at the Indian embassy, and Mandela. These three are global icons in the push for equality and social justice in diverse societies around the world.

Listening to the American activists sharing recollections of their participation in the Free South Africa Movement was also a little jarring for this South African. Sometimes I found the commentary a little myopic and ahistorical. Yes, activism in the United States helped dramatically to change the global position of the Nationalist government and contributed profoundly to its demise. But somehow—apart from the obvious stress on Mandela’s role—the contributions of ordinary black South Africans in defying the government, making its laws unworkable, increasing the costs of enforcement, and generally opposing the unjust system that dictated their lives were understated at the event. The anti-apartheid movement was far more than American elites protesting outside the South African embassy in Washington and its consulates around the United States.

The day was replete with many wonderful moments. Keynote speaker South African Minister of International Relations and Cooperation, Maite Nkoana-Mashabane, broke into a struggle song about Mandela before delivering her comments. How many foreign ministers would sing an impromptu solo like that! The mood in the gathered audience (at least where I was sitting) was relaxed and happy, with many introductions and reunions taking place. The clothing of many is also worthy of comment. Gorgeous colourful beads and fabrics abounded. I also enjoyed watching a D.C. policewoman snapping photos of the activities on her cell phone in between her official duty of directing traffic. It was that kind of a joyful day! And it was a most positive affirmation of South African-U.S. bilateral relations.

Even the rain—always a blessing in Africa—waited for the ceremony’s conclusion before bringing relief to parched Washington.