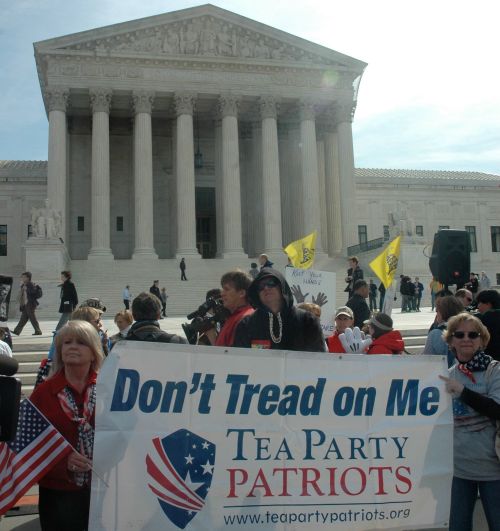 The relative decline of the United States and imminent rise of China are exaggerated—if transparency and participation are the criteria for good governance. Two recent big news stories reflect core characteristics of governance in the two societies, highlighting their respective political strengths and weaknesses.

The U.S. Supreme Court’s possible rejection of the Affordable Care Act, the core legislative accomplishment of the Obama Administration, affirms the strengths of the contentious U.S. democratic model. Juxtaposed to this debate is the dark drama surrounding Chongqing Party Chief Bo Xilai, formerly a contender for promotion to China’s über-powerful Politburo Standing Committee. Bo was stripped of all Communist Party posts and his wife arrested in a murder investigation. This unfolding story underlines the limitations of the opaque Chinese Leninist model.

These processes are occurring at politically delicate times in both countries, with potentially profound implications for each.

The United States is, of course, caught up in the orderly tumult of presidential and congressional elections, to be held this November 6. China is gearing up for its usually carefully orchestrated transfer of power between Communist Party elites at the 18th Party Congress this October, and the allocation of government roles at the National People’s Congress next March.

The rough-and-tumble of Chinese elite politics usually takes place behind closed doors. Chinese society and the world learn the outcome of the cut-throat politicking of leadership shifts only when Chinese leaders emerge from behind the curtain at Party Congresses. Glimpses of factional politics have been seen this time due to Bo’s wife Gu Kailai being implicated in the deadly poisoning of British businessman Neil Heywood. If the victim of this conspiracy were a hapless Chinese businessman not a foreigner, the world would be none the wiser. However, the appearance at the U.S. consulate in Chengdu of Bo’s right-hand-man-turned-opponent, Chongqing Police Chief Wang Lijun, with documents suggesting fishy circumstances to Heywood’s death injected unwanted global interest in the case, leading to the dismissal and arrest.

The sad fact is the outside world is probably more aware of the evolving situation in China than its citizens. The Chinese government is trying hard to control debate within China about Bo’s campaigns in Chongqing, his recent purging, and its meaning for the political transition. Yet its ability to do so in the era of the Internet, social media, micro-blogging, and instant messaging is greatly complicated. China’s cyber security police are extremely busy behind its “Great Firewall”.

Meanwhile, the specter of the U.S. Supreme Court possibly throwing out President Barack Obama’s signature healthcare law has garnered enormous attention within the United States and internationally. President Obama himself incurred great disapproval for initial criticism of the Court. He said it would be “…an unprecedented, extraordinary step” to reject a law that was “passed by a strong majority of a democratically elected Congress.” The key critique of Obama was that a president should not comment on a case pending before the Court. The Court is duty-bound to void unconstitutional laws, and it has done so before.

Obama later stepped back from this, acknowledging, “…the Supreme Court [has] the final say on our Constitution and our laws… It’s precisely because of that extraordinary power that the Court has traditionally exercised significant restraint and deference to our duly elected legislature, our Congress.” 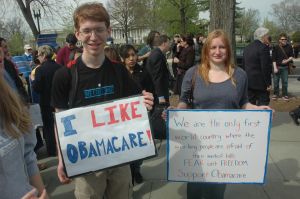 Spending a few hours outside the Supreme Court late last month when it was hearing arguments on the law was fascinating for this South African. I enjoyed listening to the cacophony of chants and calls by the equally well-represented proponents and opponents of the law. The good-natured back-and-forth between the two sides was delightful and inspiring.

The discourse included competing chants—delivered simultaneously—like: “Ho, Ho/Hey, Hey/Obamacare/Is Here to Stay” and “Hey, Hey/Ho, Ho/Obamacare/Has Got to Go”. Or it was: “We.Love.Obamacare/We.Need.Obamacare” and “The Constitution Matters/Protect the Constitution”. Songs included (sung to “This Little Light of Mine”) “This Healthcare of Mine/I’m Gonna Let It Shine…” and (sung to “Everywhere We Go, People Wanna Know”) “Everywhere We Go/There’s a New Tax There…” It was a highly memorable, albeit noisy, way to enjoy a spring morning. 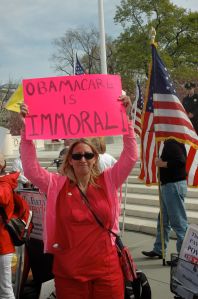 Those in other industrial democracies both marvel and recoil at the prospect of politically appointed government officials rejecting a law passed by a majority of democratically elected representatives. They are also incredulous at the very debate on whether individual healthcare insurance should be “mandated” for all American citizens, and how such a mandate could be perceived as impinging on individual freedom.

The Supreme Court’s decision is expected in late June. In a recent opinion poll, Americans anticipate the justices’ political views will determine their ruling on the healthcare law—rather than a neutral interpretation of the law. Republican presidents nominated the five more conservative-leaning justices on the bench, while Democratic presidents nominated the four more liberal justices. Whether or not the Court casts out the healthcare law, either entirely or partly, the crucial point is that the U.S. public will also get to render their verdict on the law. When the U.S. public votes on November 6, they will be able to endorse Obama’s policy prescriptions for the nation—including on healthcare—or they can repudiate them.

The long-suffering Chinese people won’t be given a chance to express their views on subjects as wide ranging as the merits or demerits of Bo’s “Chongqing model” of development or who should ascend to the nine-member Standing Committee of the Politburo. These subjects will not even be debated in the Chinese press.

Comparing a U.S. constitutional issue and Chinese elite factional politics—tangled with a criminal case—seems incongruous and contrived. But the two cases project core truths about the two countries and their systems of governance. The United States, with its often perplexing division of government authority and its relentless expectation of transparency, allows vigorous participation of its people. China is characterised by dead-end, impenetrable opacity in choosing who governs and how they govern; minimal accountability; and unwillingness to hear and indeed heavy-handed suppression of the views of those who are governed. 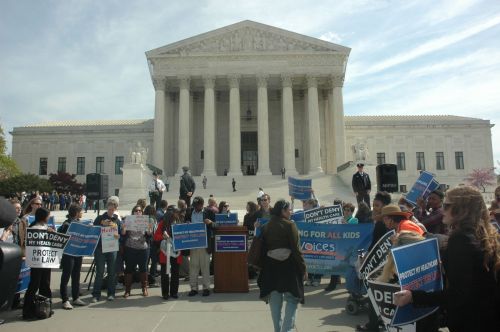 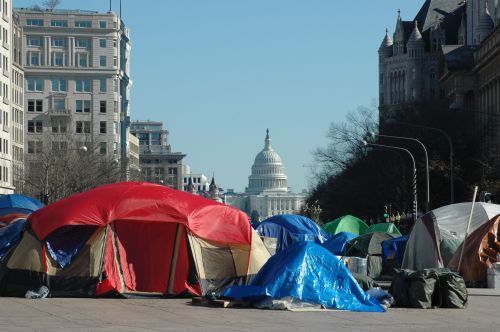 A tense standoff last night between Occupy D.C. protesters and police over an unauthorized wooden structure that protesters provocatively erected and police predictably took down, arresting 31 in the process, may escalate into a wider confrontation. Police may now decide that the two Occupy D.C. camps must be cleared. Or the camps may be allowed to continue, so long as the occupants resume their previous non-aggressive style. Whatever official decision is made, as the temperature dips further this winter, I predict that the ranks of Occupy D.C. are likely to thin.

Police in Denver, Los Angeles, New York, Oakland, Philadelphia, and Portland, amongst other cities, have already evicted protesters from parks and arrested those who resisted leaving. The clearing of the University of California at Davis campus was particularly controversial due to police pepper spraying kneeling protesters, actions that were captured on video. Mayors have justified clearing the parks as necessary for public health, and overnight camping is prohibited in many parks.

Yet the factors that motivated the Occupy movement have hardly dissipated. They are still very much in play. These include anger at expanding income disparities, where the wealthy “1 percent” gets richer and richer and the rest of society—the “99 percent”—receives diminishing or no benefit. Protesters are also disgusted at crony capitalism and how individuals and institutions in the financial and mortgage sectors were not punished for their role in the 2008 financial collapse and mortgage crisis but were instead bailed out. There is also deep frustration over ongoing unemployment and the lack of prospects, and worry about debt and the inability, for example, to repay student loans.

While the Occupy movement may have a winter go-slow, there is no question in my mind that the movement will be back in the spring, especially because of the pivotal presidential election in 2012.

The Occupy movement has profoundly changed political discourse in the United States. All discussion now on how to revive the economy to foster job creation while simultaneously cutting spending and raising revenues to cut the federal debt is phrased in terms of the impacts on high-earners, the middle class, the working poor, and the unemployed. Where to make necessary spending cuts and how and for whom to increase taxes are the core issues of the 2012 presidential campaign. That is the accomplishment of the Occupy movement.

As I walked through the two camps of Occupy D.C. last week, chatting to people here and there, the significant political impact of the Occupy movement was not all I pondered. I marveled, honoured, and celebrated freedom of speech and the right to protest.

The two Occupy D.C. camps are in the heart of Washington, D.C. The one camp, Occupy McPherson, is literally two blocks northeast of the White House; this is where yesterday’s clash with the police occurred. The other camp is at Freedom Plaza. This site is flanked by Pennsylvania Avenue as the road heads from the White House and the Treasury Department to Capitol Hill, passing the Willard Hotel, one of D.C.’s swankiest, and the National Theatre, both now gaily festooned in Christmas finery.

Yes, Washington is the “protest capital” of the United States, so local authorities are used to this type of activity and are conditioned to tolerate it. Yes, prior to yesterday’s skirmish, police had issued warnings to D.C. Occupiers about, for example, urinating in public and the like; possible pretexts to clearing the camps? Nevertheless, the camps are an extraordinary sight, and their persistence in their prominent locations highlights the core values of a tolerant society.

During my most recent stroll through Occupy D.C. camps, I wondered how other societies marked by huge disparities in income between rich and poor would handle such ongoing protests. I tried to imagine “Occupy Beijing”, with protesters camping in Beihai Park, the dusty public park nearest to the lush, well-manicured Zhongnanhai, Chinese leaders’ official compound in the heart of Beijng. The Chinese leadership’s initial tolerance of weeks-long protests on Tiananmen Square in 1989 ended in a massive blood bath. Today on Tiananmen Square, any attempt at protest, whether it is shouting obscenities or unfurling a critical banner, is squashed immediately by the vigilant, always present security officials. Instant arrest is guaranteed.

I thought about other protest movements that have emerged from the “99 percent” in 2011: The groundswell of public discontent in Arab countries that has felled dictators; and the protests in India supporting activist Anna Hazare’s campaign for tougher laws against chronic graft.

As I meandered amidst the tents of Occupy D.C., I wondered about South Africa, my home country with its alarming income inequality. Wealth there is concentrated in a small elite, government and corporate corruption is now widespread, unemployment is shockingly high, and many young people feel they have no prospects or productive means to improve their lives. Despondency increased with recent passage of a democracy-narrowing Protection of State Information Bill (Secrecy Bill) whereby classified information that is in the public interest cannot now be disclosed. Exposing government corruption or malfeasance is now seen as threatening national security.

How tolerant would South African authorities be of an “Occupy Pretoria” or an “Occupy Cape Town” that tapped into public disgust at government corruption? Imagine a tent city of frustrated, unemployed youth and other representatives of the “99 percent” in the terraced gardens under the Union Buildings in Pretoria, or in the Gardens adjoining Parliament in Cape Town. Would the South African government allow such months-long encampments? I reckon neither an “Occupy Pretoria” nor an “Occupy Cape Town” would be tolerated as long as Occupy D.C. has been allowed to endure.