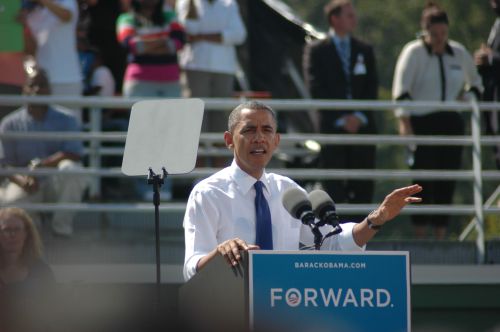 The presidential campaign permeates everything at present. Even if you’re totally disinterested in politics, the campaign is hard to avoid or ignore. Certainly its ubiquity, the sheer overwhelming quantity of all its manifestations, and the negativity of much of the advertising can be a turn off. And it is such a  l-o-n-g process, even for political junkies like myself.

Part of the cacophony relates to living in Virginia, one of the key battleground and swing states—along with Colorado, Florida, Nevada, New Hampshire, North Carolina, Ohio, and Wisconsin—in the race between President Barack Obama and Governor Mitt Romney. Obama has succinctly acknowledged Virginia’s pivotal significance: “If we win Virginia, we will win this election”. Virginia also has an extremely tight U.S. Senate race underway between former governors George Allen and Tim Kaine. The outcome of this race could impact whether the Democratic Party retains the majority in the Senate, or control shifts to the Republicans.

There are so many avenues for campaign activity now. The Internet and social media are drenched in promotion and advertising for the candidates and their platforms. Yet television as a forum still appears to trump web-based promotion. Both of the presidential candidates and their wives have appeared on countless TV programs, including daytime chat shows and late night comedy hours. When in New York last week to address the U.N. General Assembly, Obama did not participate in any traditional bilateral asides with other visiting heads of state, delegating this role to Secretary of State Hillary Clinton instead. Controversially though, his busy schedule did accommodate him and his wife filming a segment for “The View”, a popular daytime talk show.

The biggest television moments for the campaigns will be the three presidential debates and the sole vice-presidential debate. The first debate, which takes place tomorrow night and focuses on domestic policies, will likely attract the largest audience of the campaign, larger than for either of the two parties’ conventions.

TV in Virginia is also saturated with advertising by both campaigns and their surrogate political action committees. Back-to-back political ads have long displaced dog food, hair shampoo, and laundry detergent commercials. More interesting to me is the placement of political ads in video games. Already in 2008, the Obama campaign embedded ads in games like Need for Speed Carbon, and it is doing so again this year in Madden NFL 13, for example. National Public Radio reported yesterday that these ads apparently appear only if you are playing online games in a targeted battleground state.

Turn on the radio for a few minutes, and the odds are high you will hear a political advertisement or two. Open your mailbox, and there’s probably a pamphlet, brochure, or fundraising appeal from any of the campaigns. Lawn signs are starting to proliferate in the neighbourhood, although the “battle of the lawns” hasn’t really begun yet this far from November 6. It is fascinating to observe neighbours revealing their political colours with their choice of lawn signs. I’ve been playing a guessing game with myself, trying to anticipate who supports whom. The lawns of those living at prominent junctions are obviously especially coveted. 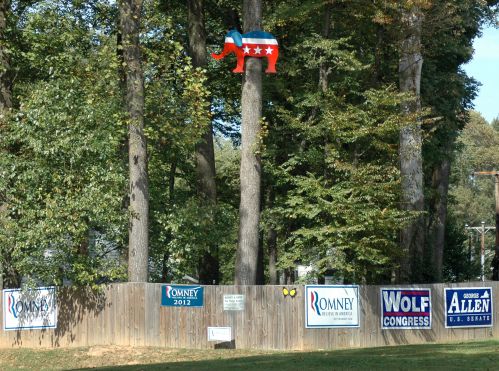 The “ground game” in Virginia is particularly impressive. Both campaigns have opened dozens of field offices here, and have signed up swarms of volunteers to go door to door to solicit interest, canvass support, and remind folk to vote. People from both presidential campaigns have stopped by our house to chat, check whether we are registered to vote, and of course try to glean how our household votes. Given that I’m not an American and thus of course not eligible to vote, conversations with me end quite quickly.

We’ve received phone calls from both campaigns, some being automated “robocalls”, but also a couple from “real people” who have left messages, requesting our participation. My favourite anecdote with one of these automated calls stems from late in the 2000 presidential election when we were living in Seattle. A recorded message on our answering machine one day was from Robert Redford! Redford had “called” in support of environmentalist Al Gore. I enjoyed listening to his three-minute message about saving the earth and how Gore was the man for the task. My husband teased me as it admittedly took a few days for me to delete the message. I’m wondering who may call our home this time round. George Clooney? Clint Eastwood?

Another area of contest is the car. Bumper stickers and car magnets proliferate. The “doggy wars” are particularly active on the back of people’s cars, given Romney’s noteworthy strapping of the family’s dog (in its kennel) to the top of their car one family holiday years ago. Subsequently, Obama allowed a photograph of him with Bo, the Obama family’s dog, to be taken inside the presidential limousine. Democrats are delighting in displaying “I Ride Inside” bumper stickers, a product from “DogsAgainstRomney”.

Other moments from the campaign have also already been absorbed into popular culture. An empty chair will, for example, never be the same again. And the surreptitiously made video of Romney damagingly disparaging 47 percent of the American public as people “who are dependent upon government, who believe they are victims, who believe the government has a responsibility to take care of them, who believe they are entitled to health care, to food, to housing, you name it” has galvanized Democratic t-shirt and poster makers, and provided fodder for some of their best material.

When we look back at the 2012 campaign, I believe the disclosure of these comments from Romney will be seen as the turning point in the campaign, the moment when he lost his bid to succeed Obama. These unguarded comments revealed Romney’s true disposition, showing that he really doesn’t understand how America works, if you’ll excuse the pun, and revealing the extent of his detachment from the lives of regular Americans. This candid speech validated the caricature of Romney that relentless Democratic attack ads suggested all summer long.

The unceasing demand for exposure to the candidates in a U.S. presidential campaign creates the chance for such slip-ups, especially when candidates are trawling for money. And more character revelations may yet come. There is, after all, still over a month to go until the votes are in.

Yes, the campaign is arduous and—especially this year, after the U.S. Supreme Court’s Citizens United decision permitting unlimited corporate donations to campaigns—an atrociously extravagant way for people to choose their government. But there is no other purposeful spectacle quite like it, anywhere in the world. Viva democracy.

Update on October 4, 2012: The spectacle isn’t over, folks! After last night’s first presidential debate, it’s once again a real race. Romney’s campaign has bounced back from the debacle over the “47 percent” remarks with him delivering a strong, impassioned debate performance. While debating solidly, President Obama seemed under-prepared. Romney was too aggressive at times, I felt, and part of Obama’s demeanour suggested to me that, after four years in the presidential bubble, he wasn’t used to being spoken to without deference. Last night was really a celebration of democracy though. Imagine South African President Jacob Zuma having to defend his government’s policies for 90 minutes in a similar forum with Helen Zille? Or China’s leader-in-waiting Xi Jinping being exposed to 90 minutes of back-and forth with a seasoned domestic critic of China’s current economic policies? 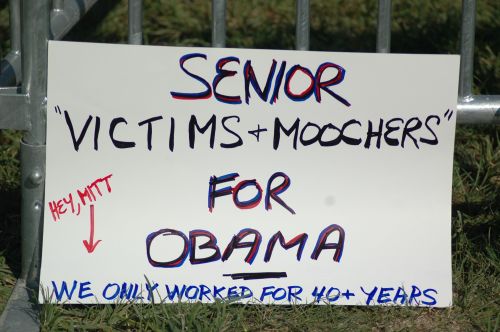