The eating is exotic and good! 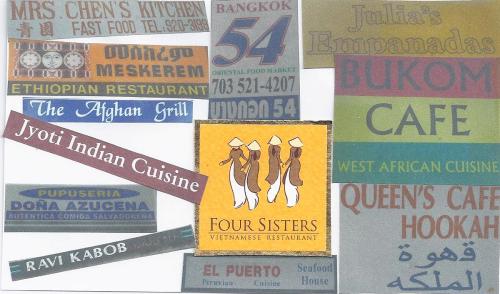 Given the wide range of popular ethnic restaurants in the greater D.C. metro area, you might think the path to Washington policy makers is through their stomachs. Enjoying the available ethnic cuisines is one of the many pleasures of living in this city.

The range and quality of eating experiences, plus the variety of cultural offerings, reflect Washington’s transformation into a sophisticated, global city from its small-town, swampy, Southern roots. The presence of so many foreigners, thanks to the diplomatic missions and international organizations based in the city, adds too to its cosmopolitan appeal and flair. Washington is not, however, on the mega-city scale of either New York or London: The 2010 census estimated the greater Washington metropolitan area to have a population of around 5 and a half million; the District of Columbia itself is just over half a million.

The diversity of restaurants and eating options in Washington really reflects the waves of immigrants who have ended up here. The archetype immigrant to the United States arrives and starts a small business. More often than not, this business is a restaurant that serves food from back home. Or it may be a supermarket specializing in items from that particular region of the world. It might also be a food truck, a “restaurant on wheels” that sells a limited selection of already prepared food, often with a clear ethnic identity.

Running a restaurant that serves native food is usually the preserve of newest immigrants. It is typically the first step on the ladder toward achieving the fabled “American dream”. And it is certainly not the last.

It is also not without contradictions. When Ethiopia suffered devastating famine and traumatic internal displacement of people in the early and mid-1980s, there was also an influx of Ethiopians to the D.C. area. Many started restaurants. I was a graduate student in Washington at that time, and I recall how dining at Ethiopian restaurants was the rage then, largely because of the cuisine’s novelty. Meanwhile people in Ethiopia were struggling to feed themselves.

The many foreign specialty supermarkets make for great browsing. All sorts of ingredients can be found, some familiar, others mysterious and obscure. Like supermarkets the world over, most American supermarkets have “international” sections where one can easily buy kitchen cupboard standards like Japanese soy sauce or Thai sweet chili sauce. The joy of the foreign delicatessens is in finding a particular ingredient that facilitates the making of a much-loved-but-rarely-eaten dish, or one that begs a cooking experiment.

Not all immigrants start off trying to create new lives for themselves and their families with a family-run restaurant, a food truck, or a specialty supermarket. In Northern Virginia, it seems that Korean and Mongolian immigrants have cornered the dry cleaning business. I am amazed at how many Africans—from Ethiopia, Guinea, Kenya, and Sierra Leone—are nursing assistants in area hospitals and nursing homes. The other stereotypical job for newly arrived immigrants the world over is the taxi business. Certainly, Washington has a preponderance of Ethiopian, Indian, Nigerian, and Pakistani cab drivers.

Neighbourhood enclaves of immigrants from particular countries are very fluid and can change quickly. For example, as the area east of The White House has gentrified, the restaurants and shops that comprised “Chinatown” have been pushed out to a suburb of Maryland. A strip of Vietnamese restaurants in Arlington, Northern Virginia, formerly had the informal moniker, the “Ho Chi Minh Trail”. Sadly, these restaurants from the 1980s and 1990s have been displaced as rents have risen. Yet, most of the immigrants who ran those restaurants have probably graduated from running restaurants and been absorbed into American society.

And this is the key observation: The ethnic restaurant business is a multi-generation enterprise. The newest immigrants to the United States often start the restaurants. They don’t speak English and are willing to work hard for long hours for small financial reward. Yet their children, who will have worked in the family restaurant growing up, often become professionals, such as teachers, doctors, and lawyers, and fully part of mainstream American society—thereby fulfilling the “American dream”.